In the Heart of the Silk Capital

Since the 17th century Lyon has been the center of production of some of the most unique and luxurious textiles ever created. And over the course of time, The Musée des Tissus has built one of the largest (if not the largest) collections of textiles in the world; here you can open your eyes upon 4000 years of textile history. The museum, situated right in the center of the city, is housed within two of its most beautiful 18th century houmes. In a town where people are modest about showing off their material success, these buildings are lavish exceptions. In one, The Hotel de Lacroix-Laval built in 1739, you can see how furniture, clocks, bronzes, ceramics, textiles and silverware were used in the decoration of a French 18th century home. Everything in the museum has a human dimension and one has the feeling to wander through someone's home as opposed to visiting an art gallery or museum. For the past five years the Museum has been in the charge of a young and dynamic French curator, Maria-Anne Privat-Savigny, and has known a small revolution and made a giant step into the 21st century. The number of visitors has increased accordingly!

The following is an interview with Madame Privat-Savigny which we at The NDT were delighted to have been given and to share with our readers. 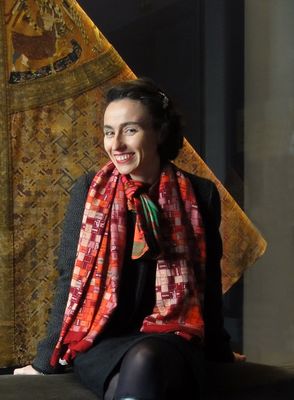 NDT: Why does the Musée des Tissus look so different from most other museums?

MAPS: The Musée des Tissus et des Arts Décoratifs had at its inception the opportunity to be housed within two beautiful adjoining 18th c. homes, both worthy representatives of the architecture of their time. In designing the layout of the two Museums we've kept in mind the sense of intimacy in these former homes and we try to give to visitors the feeling that they're entering the Museum as if they were invited to visit a private 18th c. property. To be welcomed as if you were visiting a friend is something that our public enjoys and very much appreciates.  And the fact that we are a fabric museum and a decorative arts museum all at once, makes it easier for us to create a lively setting reminiscent of life at the time the objects we present were created. 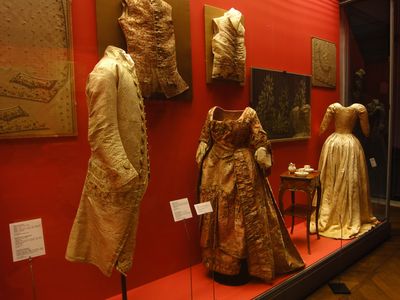 NDT: The Musuem is known for having one of the largest textile collections in the world.  What in your opinion are its strongest points?

MAPS: The Museum has a huge collection of textiles.  In our inventory we have more than one million pieces.  We are particularly strong in certain areas, for example Coptic textiles where we have the second largest collection in Europe after the Louvre, also in Ottoman, Persian and Asian textiles.  And obviously we are a kind of repository for the textiles produced in Lyon from the 17th to the 20th century. Our collections are so rich that the Museum can live completely self-sufficiently while replenishing each year the works that are presented to visitors.  At a time when zapping has become so popular, the fact of our being able to regularly and easily renew our shows is a big asset.  And the large collection of decorative arts housed in the Museum makes it easy for us to present the textiles we have in context and in an attractive way. This is very useful too from a research point of view;  how many, many times we've found objects in our collection with the same motifs that are found on textiles in the collection from the same origin and period! 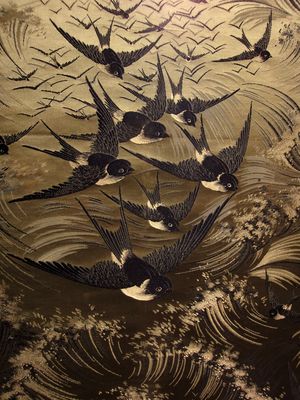 NDT: Your Museum has always had strong roots in the Lyon textile industry and connections with local life in the city. How does the museum maintain this tradition today?

MAPS: As a matter of fact the life of the Museum has had from the very beginning a strong link with local life in Lyon. The roots of the Museum date from 1856, the date when the Museum of Arts and Industry was created. After the London Worlds Fair of 1851, Lyon became aware that the English textile industry was very much in advance of the French one for everything related to industrial production but that the strong point of Lyon was its creativity and more particularly, its textile designers. The Museum was created primarily for them, in order to provide for them a central place in Lyon where they could find all the sources of inspiration and culture that are crucial to an artist. Today the Museum has developed many different activities to maintain these links. Five year old children all the way up to senior citizens can participate in workshops organized around discovering textiles and decorative arts, and not only the historical aspects but hands-on activities too that allow them to explore the technical processes that are involved.  One of our major goals is to stir up interest in the younger generations for an art and an industry that have such deep historical roots in Lyon. Special programs were specifically developed to lure students to Lyon.  The Museum also has the wonderful asset of its own library which is open not only to researchers but also to the public.  In a more general way, in a society where culture has become somewhat industrialized, the success of the Museum and the magnitude of its visitors have had an important and positive effect on our local industries and services. 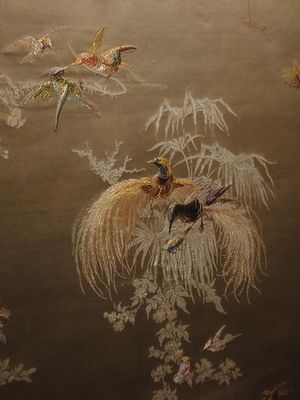 NDT: The Museum organizes many shows and events every year. Could you talk about which were the most successful?

MAPS: I would say first that all the events and shows we have organized over the last few years were welcomed by our visitors. Not one has produced a deficit. "Paper Dreams" by Isabelle de Borchgrave  was our biggest success and brought in the greatest number of visitors.

NDT: What are your projects for the near future?

MAPS: 2011 should be a year full of new things.  We have several important exhibitions lined up:

"Under the Signs of Ovid's Metamorphosis:"

"Ducharne, Dubost, Bianchini-Férier, Dufy and the others: Modernity in the Lyon Silk Industry," April 15 - August 28, 2011

In speaking about the year to come, I'd like to draw attention to the fact that many rooms of the two museums have been renovated and redesigned to be more attractive to our visitors and I don't think they'll be disappointed in the Museum's ability to reinvent itself.  I'd also like to take advantage of this moment to wish an excellent year to all of our visitors and to the loyal supporters of the Museum! 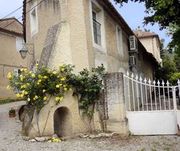 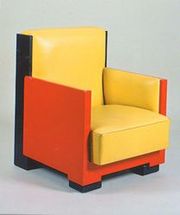