The words "energy building" or "zero energy building" are used more and more in magazines but often the waythey are used is inappropriate. It's useful to have in mind the following definitions provided by by The National Renewable Energy Laboratory, US Department of Energy.

Net-Zero Site Energy: A building that produces at least as much energy as it uses in a year, when accounted for at the site. The measurement time frame is annual.

Net-Zero Source Energy: A building that produces at least as much energy as it uses in a year, when accounted for at the source. "Source energy" refers to the primary energy required to generate and deliver the energy to the site. To calculate a building's total source energy, imported and exported energy is multiplied by the appropriate site-to-source conversion multipliers.

Net-Zero Energy Emissions: A building that produces at least as much emissions-free renewable energy as it uses from emission-producing energy sources annually. Carbon, nitrogen oxides, and sulfur oxides are common emissions that NZEBs offset.

Near Zero Energy: A building that produces at least 75% of its required energy through the use of on-site renewable energy. Off-grid buildings that use some nonrenewable energy generation for backup are considered near zero energy because they typically cannot export excess renewable generation to account for fossil fuel energy use.

Located in Baraboo, WI, USA this project was completed in April 2007. This is The headquarters for the Aldo Leopold Foundation.Born in 1887 Aldo Leopold is considered by many as the father of wildlife management and of the United States wilderness system. 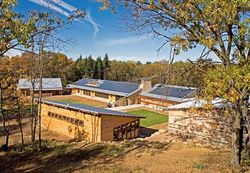 This building is a carbon-neutral, net zero energy building

The AIR House was designed by a Czech University team. The building is highly energy efficient and offers its residents maximum comfort. It is made almost entirely of wood, --->

The homes are built using the Zedfactory's RuralZED system which was pioneered by architect Bill Dunster. They are suposed to meet level six of the UK Code for Sustainable Home. Zedfactory said the homes cost approximately 10% more to build than a conventional home. This last point is disputable. 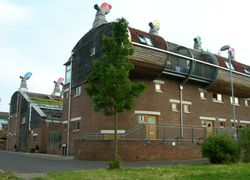 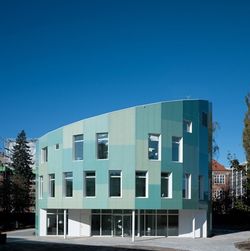 This building will literally become a source of renewable energy and serve as a showcase at the United Nations Climate Change Conference in Copenhagen in 2010.

Spectacular Architects Projects for the Future 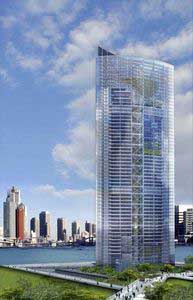 This ambitious project in Dubai was designed by Eckhard Gerber architeckten international in cooperation with the environmental engineers DS-Plan. It's believed to be the world's first zero emissions office building.

The Energy Tower transfers the traditional techniques of natural ventilation as used in the historic wind towers of the Middle East into cutting-edge building technology. The Energy Tower is highly energy efficient and 100% energy self-sufficient. It produces itself 100% of its own energy demand through renewable resources. The Energy Tower is thus defining a new generation of sustainable high-rise buildings. The energy of the wind is used for the ventilation of the entire building. 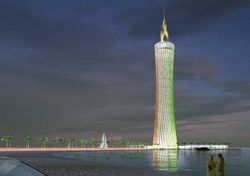 The top of the building is crowned by a wind turbine generating ecological wind power, turbine based on the Darrieus type. 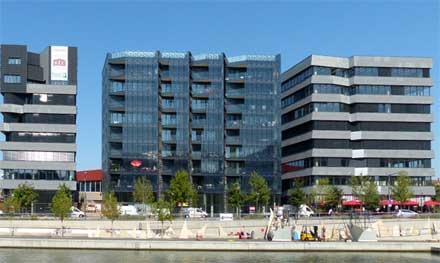 The HIKARI buildings, Lyon, France, were achieved in 2015. The complex has been verified as a PEB, a status realized by installing solar power and co-generation systems to generate power, and the use of absorption-type chiller, stationary batteries as energy storage devices, and thermal storage substances for cold water heat storage, LED lighting and other energy-saving devices. All of this equipment is centrally managed by an Energy Management Systems (EMS), and energy consumption has been reduced by 10% or more than the calculated amount at the basic design phase. ( REF; TOSHIBA Tokyo)

The Art of Seascape Painting