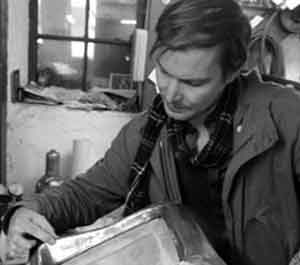 Stefan Diez is a German designer born in 1971 in . After training to be a carpenter, he studied industrial design at the Academy of Formative Arts in Stuttgart. From 1996 to 2002, he was employed as an assistant to Richard Sapper and then to Konstantin Grcic in Munich. In January 2003, he opened his own studio in Munich where he works in the areas of product and exhibition design. His clients include Authentics, Biegel, Merten, Moroso, Thonet and Wilkhahn. His work has received numerous awards, including several Red Dot Awards, iF product design awards and special prizes for material innovations. Stefan Diez was and is represented in a variety of exhibitions in museums and within the framework of trade fairs. He is regarded as one of the most innovative and promising designers of the younger generation in Germany which already enjoys a good reputation at international level.