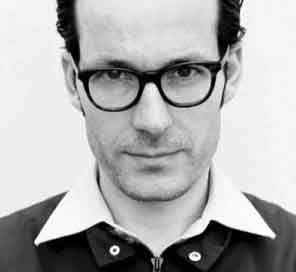 The German designer Konstantin Grcic, is one of the most important designers working today. Since 2004, he has been developing a significant body of work that illustrates a shift in his practice and output. Although his production continues to be characterized by an uncompromising approach that favors simple, yet distinctive design solutions, Grcic has more recently harnessed an interest in new technologies and materials research that have afforded him a progressively ambitious portfolio of furniture and product designs that are transforming the landscape of contemporary designGrcic’s studio, KGID, based in Munich, has gained critical recognition internationally for work that cuts across commercial and cultural fields for a cross-section of prestigious companies worldwide, including Classicon, Krups, Moroso, Plank, Vitra, Luminaire and Magis. These include the Mayday Lamp, produced for Italian manufacturer Flos in 1999, a reinterpretation of the industrial lamps used in auto mechanic shops, transformed for domestic use, which won the prestigious Compasso d`Oro award at the Milan furniture fair that same year. Grcic trained as a carpenter at Parnham College in southern England before graduating in 1990 with a master’s degree from the design department of the Royal College of Art in London. However, it was while working for British designer Jasper Morrison, known for reinvigorating everyday objects through a minimal visual language that Grcic found his way; in 1991, Grcic returned to his hometown Munich and founded his own studio. Grcic delights in creating fresh takes on familiar industrial designs—whether desks, chairs, benches, stools, a range of kitchen equipment, lamps, or a set of salad servers. This foundation, has enabled him to carve out a unique career path that honors the tenets of modernism based on pure geometries of form but at the same time is unrestrained from ideologies and approaches steeped in industrial design theory and practice, resulting in innovative new archetypes of form and function.