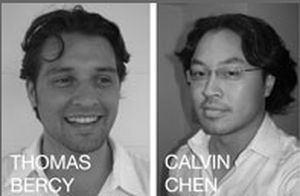 Bercy Chen Studio LP is an architecture & urban planning firm with design/build capabilities based in Austin, Texas founded in 2001 by partners Thomas Bercy and Calvin Chen, both graduates of the University of Texas at Austin. The firm was recently profiled in Architectural Record’s December 2006 ‘Design Vanguard’ award issue, selected as one of top 10 emerging design firms in the world. In 2007 Bercy Chen Studio LP was part of the Young Americans exhibition at the Deutsche Architektur Museum in Frankfurt, Germany. The firm’s work has been published in over 20 countries including The New York Times and Business Week for design innovation in 2007.

Thomas & Calvin have also been invited guest speakers at the National Building Museum in Washington D.C. Thomas is from Belgium and Calvin is from Taiwan by way of Australia; the partners’ European and Asian backgrounds form a design philosophy of unique perspectives. The work is influenced by vernacular precedents from various cultures- whether Islamic, Indian, African or pre-columbian, while maintaining respect for the particular contemporary contextual conditions. Due to this unique approach, the work has received national and international attention. Bercy Chen Studio won the prestigious ‘Emerging Voices’ prize from the Architectural League of New York in 2006. Every year the League selects 7 of the most innovative designers from Europe and North America for this award.