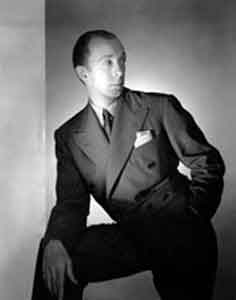 Robsjohn-Gibbings is a British-born architect and furniture designer. Robsjohn-Gibbings studied architecture at London University. He afterwards worked briefly as a naval architect, designing ocean liner interiors, and then as art director for a motion picture studio. In 1926, he became a salesman for an antiques dealer who specialized in Elizabethan and Jacobean furniture, and Robsjohn-Gibbings was assigned prominent accounts such as Elizabeth Arden and Neiman Marcus. In the late 1930s and 1940s he was the most important decorator in America. After opening a shop on New York's Madison Avenue in 1936, Robsjohn-Gibbings proceeded to design houses from coast to coast for such scions as tobacco heiress Doris Duke, Alfred A. Knopf, and Thelma Chrysler Foy. The design work of T. H. Robsjohn Gibbings is hallmarked as a modern mixture of the classical elements of Ancient Grecian design, and Art Deco design. It features mosaic floor reproductions, sculptural fragments, and sparse furnishings, all combining to achieve his trademark brand of modern historicism. He disliked the prevailing tastes of the day, describing them as "an indigestible mixture of Queen Anne, Georgian and Spanish styles."

He likewise considered Bauhaus-style modernism a fraud; he expressed his views in his writings such as "Goodbye, Mr. Chippendale" (1944), "a spoof of modern interior design", "Mona Lisa's Mustache: A dissection of Modern Art" (1947), and "Homes of the Brave" (1953).

One of the designer's most important residential commissions was Hilda Boldt Weber's mansion Casa Encantada in Bel-Air. Creating more than 200 pieces of furniture for the house between 1934 and 1938, Robsjohn-Gibbings indulged his passion for Greco-Roman design by incorporating sphinxes, dolphins, lions' paw feet, and Ionic columns in table bases, torchères, and select pieces of furniture, nonetheless keeping the interior design simple and elegant. Casa Encantada survived its sale to Conrad Hilton in 1952, but its next owner, David Murdoch, stripped the house of what was called "opulent simplicity" and auctioned off the contents in the early 1980s. T. H. Robsjohn-Gibbings much preferred the visual vocabulary of the classical world, particularly ancient Greek furniture and design. Robsjohn-Gibbings' look was widely emulated, and, from 1943-56, he worked as a designer for the Widdicomb furniture company in Grand Rapids, Michigan. In 1960, he met Greek cabinetmakers Susan and Eleftherios Saridis, and, together, they created the Klismos line of furniture, which drew heavily on classical forms. It is still in production. Robsjohn-Gibbings eventually moved to Athens, where he became designer to Aristotle Onassis. His honors include the 1950 Waters Award and the 1962 Elsie de Wolfe Award.