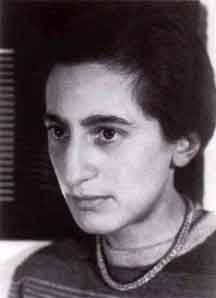 Anni Albers ( born Annelise Fleishmann) is one of the most famous American Textile Designer. She was born in Berlin, Germany in 1899. Her father was a furniture manufacturer. Education: Art school in Berlin from 1916 to 1919 with the impressionist painter Martin Brandenburg (1870-1919) Kunstgewerbeschule in Hamburg (1919?1920) Bauhaus in Weimar (1922?1925) where she met Josf Albers , an abstract artist she married in 1925. Dessau (1925?1929) At this time she was introduced to many artists such as Oskar Kokoschka, George Muche, Johannes Itten, Paul Klee, Kandinsky. USA She left Germany and settled in the USA in 1933 after the closure of the Bauhaus, and from 1933 to 1949 she taught at Black Mountain College in North Carolina; she became a US citizen in 1937. In 1949 she was invited by the Museum of Modern Art, NY for an exhibition, Anni Albers Textiles. The same year her husband became the chair of the design department at Yale. Style Main Influences: Bauhaus, Latin America Her Bauhaus training led her as early as the 1920s to produce rectilinear abstract designs based on colour relationships. She began producing prints in 1963, using lithography, screenprinting, etching and aquatint and inkless intaglio Commission and Industrial Collaboration Knoll