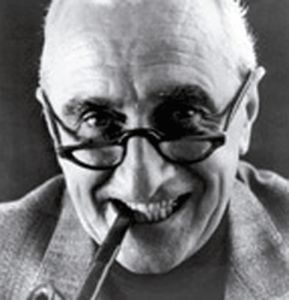 Luigi Caccia Dominioni is an Italian architect and designer born in 1913 in Milan, where he remained to graduate with a degree in architecture in 1936. In the same year he began practicing in partnership with Livio and Pier Giacomo Castiglioni and together they developed a reputation as pioneers of industrial design. Their collaboration resulted in some particularly important projects: a series of radio sets for Phonola and the research and manufacture of a wide range of cutlery. His 'Caccia' cutlery comes from this research and is on permanent display at the Museum of Modern Art in New York. From 1950 to 1980 he designed numerous buildings in Italy and across Europe - the Viboldone monastery, the churches of St. Biagio at Monza, the housing estates at San Felice in Milan, and Monticello, the Parc San Roman skyscraper in Monaco. He also reconstructed the Poldi Pezzoli Museum in Milan.