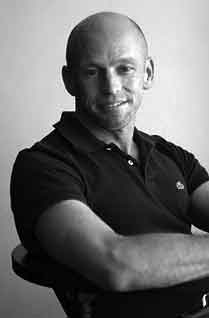 Johnson's research into history and theory, as well as his careful observations of striking interiors and architecture abroad, are made manifest in pieces that strike an original balance between innovation and reproduction. "I realized that a lamp is not just a lamp" Johnson says "There can be a story there, something that sparks the imagination. Every person will have a different experience with each piece as they call on their collective memory with clues given by historic reference." A California native, Johnson is the son of an artist and a developer and initially aspired to be an architect. With a degree in Architecture from USC he also participated in summer study programs in Rome and at Cambridge University, England, which exposed him to a place where art, architecture and history converge. After school, Johnson worked briefly in architecture but within years found himself in the world of furniture, working with such companies as Charles Pollock, Charles Fradin and Dessin Fournir. Inspired by his growing knowledge of furniture details and buoyed by his valuable experience, Johnson soon began plans for Aesthetic.