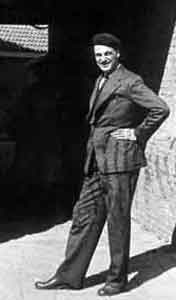 Mart Stam, born 1899 in Purmerend in the Netherlands, was among the leaders of Modern Architecture and a pioneer in contemporary furniture design. He attracted much attention in 1927 with his architectural contribution to the Wei?enhof project in Stuttgart both as an architect and as a designer experimenting with tubular steel. In 1928 and 1929 he worked as an architect in Frankfurt, where he helped build the Hellerhof housing estate, among other projects. At the same time he served as a guest lecturer at the Bauhaus, teaching elementary construction theory and urban planning. From 1930 to 1934, Mart Stam was active in Russia and other countries; he subsequently worked as an architect in Amsterdam until 1948. In 1939 he assumed the top position at the Academy of Arts and Crafts in Amsterdam, and in 1950 he was named director of the Conservatory for Applied Art in Berlin-Wei?ensee. He returned to Amsterdam in 1953 but emigrated to Switzerland in 1977, where he died on February 23, 1986, in Goldach.