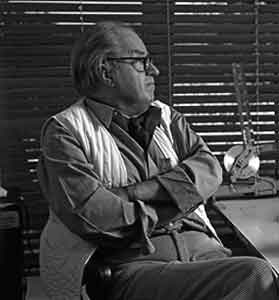 Antti Nurmesniemi was one of the designers who made Finnish design world famous among with such other important designers as Alvar Aalto, Eero Aarnio, Ilmari Tapiovaara, Tapio Wirkkala, Yrj? Kukkapuro, and Eero Saarinen. The enamelled coffee pot designed in 1957 is an icon, as is the Palace Hotel Sauna stool designed in 1952, and the red-orange underground cars designed by him together with B?rje Rajalin for City of Helsinki, 1968-77. Professor Nurmesniemi designed furniture and lightning fixtures for such Finnish companies as Artek (1957-60), Merivaara (1963-66), Vuokko (1964-88), Piiroinen (1990-) and for Tecta M?bel, Germany (1978) and Cassina, Italy (1985). He designed kitchenware - pans and pots for Wartsila (1957-75) and H?gfors (1959-70). And for Fujitsu Co, he designed the super-flat push button telephone 'Antti' in 1984. The Museum of Modern Art, New York; the Stedelijk Museum, Amsterdam; the R?hska Museum, Sweden; Kunsindustrimuseet, Oslo; Philadelphia Museum of Applied Art and Seibu Museum of Art, Tokio are only some of the museums that have included Nurmesniemi's works in their collections. During his long career as an industrial designer, Nurmesniemi has received numerous of prizes and honours: the Grand Prix in Milan Triennal (1960, 1964), Pro Finlandia medal, The Lunning Award, State Design Award, Finland; the 5th International Design Award, Osaka; and the most recent: Estlander-medal 2000, Finland, among other.