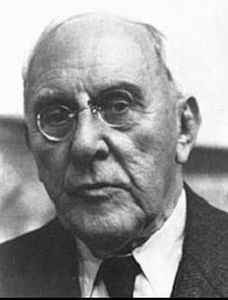 Joseph Hoffman was an Austrian architect and designer known as " Quadra-lateral Hoffman" for his passion for geometrical forms. Hoffman is with Kolo Moser and Otto Wagner one of the designers who led to the total aesthetic renewal of design and interior decoration in the early 20th century. As Otto Wagner said "All modern forms must correspond to the new materials and meet the requirements of the present time, if they are to be found suitable for mankind today" Joseph Hoffman studied architecture with Otto Wagner in Vienna and later joined the Wagner's studio of architecture. He opened his own office in 1898, and became extremely interested in the linear dimension of the Glasgow School and the Mackintosh influences. Together with Gustav Klimt and their revolutionary art nouveaux contemporaries, they founded the 'Vienna Secession', an organization intent on promoting the developing Art Nouveau genre of the period. Constantly pushing for a renaissance of abstract arts forms and architectural purity, he founded the Wiener Werkstatte together with his two architect associates Kolman Moser and Joseph Maria Olbrich. Hoffmann is well-known for the simple, restrained, yet visually interesting dining chairs, several intended for cafes, that he designed early in the 20th century.