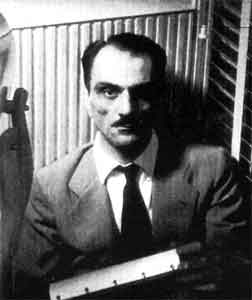 Architect Carlo Mollino was born in 1905 and trained at the Polytechnic in Turin, where he graduated in 1931. A skier, driver, and aeroplane pilot, Mollino soon found himself well inserted in the lively cultural environment in Turin, between the two wars, where he made friends with personalities in the world of culture and art. Together with his meticulous technical training, which paid particular attention to functional aspects, in his projects there was always crosstalk between elements of modernity and a considerable sensibility for the past. From 1933 to 1973, the year when he suddenly died, he made a total of only about ten architectural works. Particularly noteworthy among his masterpieces was the Societa Ippica Torinese (1937?1940) in which rationalism intensifies and extols metaphysical elements, the building for the Slittovia di Lago Nero (1946-1947) in which the traditional Alpine ski-lift building was rethought in original form, and the new Teatro Regio in Turin (1965-1973), which interior Mollino himself referred to as "a shape somewhere between an egg and a half-open oyster". Equally important was his work as an interior designer. His Casa Miller (1936) and Casa Devalle (1939-1940) reveal a surrealist taste. In 1949 he started teaching at the Faculty of Architecture at the Polytechnic of Turin, and the following year he was invited to take part in a travelling exhibition in eleven American museums. Mollino never worked for large industry. Most of his furniture were carried out as one-off items. The most prolific years of his career came to a sudden end in December 1953, with the death of his father Eugenio. The architect's activities were suspended in favour of his passion for motoring and aerobatics. In 1954 he designed Nube d'Argento, an exhibition for the national gas company, and the following year he created, amongst others, a racing car, the Bisiluro, which took part that year in the 24 Hours at Le Mans. Later he created two record cars remained in a model state. In 1960 Mollino returned to his work as an architect and started redesigning the apartment in Via Napione in Turin, which is now Museo Casa Mollino. Carlo Mollino left several essays and books, ranging from narrative to architecture, and on to skiing technique and photographic criticism, including Il Messaggio dalla Camera Oscura, which was written in 1943 and published in 1949.