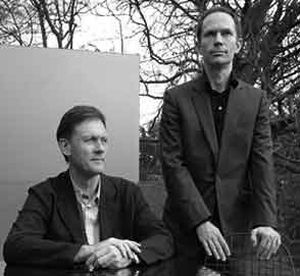 Architects Nick Eldridge and Piers Smerin launched Eldridge Smerin in 1998. Their first project, The Lawns, a family house in the Highgate Conservation Area in London for Frances and John Sorrell won awards from the RIBA and Civic Trust, was shortlisted for the prestigious Stirling Prize and cemented their reputation as leaders of the new wave of cutting edge domestic architecture with a series of commissions for new houses on similarly sensitive sites. Within a short space of time, the practice also completed a diverse range of other projects including the radical new research and development Headquarters for BT Cellnet/02 at Ealing Studios, the Headquarters for E Oppenheimer and Sons of De Beers, in Hatton Garden, London, an entire floor of the new Birmingham Selfridges, and the interior and landscape of the luxury brands Villa Moda department store for Sheikh Majed Al-Sabah in Kuwait. Recent projects include the redesign of the Design Council's workspace in Bow Street, London, the Headquarters for a fashion group in Clerkenwell, a Sixth Form Centre for a secondary school near Solihull, the new Business and Intellectual Property Centre at the British Library and an audacious new house on the edge of London's Highgate Cemetery.

As well as bespoke houses the practice has also developed a low-cost house building kit as featured in a recent episode of Channel 4's Grand Designs. In its ten years Eldridge Smerin has built a reputation for producing intelligent and memorable solutions in response to varied clients' briefs and for beautifully detailed buildings and interiors within often tightly constrained budgets. The practice's buildings challenge conventions and their innovative environments lead the way in workspace, retail, educational and residential design. Eldridge Smerin's work has been published widely in the UK and abroad.