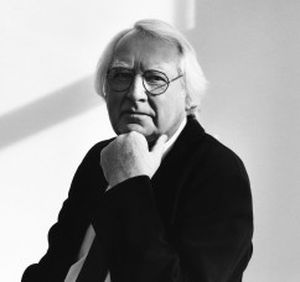 Richard Meier was born in Newark, New Jersey in 1934. He graduated from Cornell University in 1957 then worked with a series of architects, including Skidmore, Owings, and Merrill and Marcel Breuer. He established his own practice in 1963. Meier has maintained a specific and unalterable attitude toward the design of buildings from the moment he first entered architecture. Although his later projects show a definite refinement from his earlier projects, he clearly authored both based on the same design concepts. With admirable consistency and dedication, he has ignored the fashion trends of modern architecture and maintained his own design philosophy. Meier has created a series of striking, but related designs. He usually designs white Neo-Corbusian forms with enameled panels and glass. These structure usually play with the linear relationships of ramps and handrails. Although all have a similar look, Meier manages to generate endless variations on his singular theme. A main figure in the "New York Five", which gained public attention in 1975, Meier creates designs with a unified theme based on neo-modern beliefs in purist architecture. Meier's white sculptural pieces have created a new vocabulary of design for the 1980s.