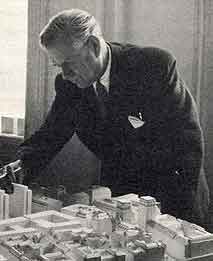 Sven Gottfrid Markelius was one of the most important modernist Swedish architects and designer. Born in Stockholm in 1889, he studied at the Stockholm Polytechnic and the Art Institute. His style was initially inspired by Neo-Classicism but he was later influenced by Le Corbuiser and the ideas of the Bauhaus and converted to Modernism and was a pioneer in what has become known as Scandinavian Modern. During the 1950s he produced a series of textile designs for the Nordiska Kompaniet.