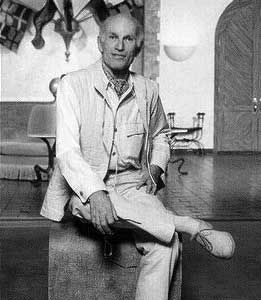 Renowned for his imaginative fusion of austerity and fantasy, elegance and humor, John Dickinson crafted many of the most innovative American interior and furniture designs of the 20th century. A Berkeley native, Dickinson studied at the Parsons School of Design before taking a job in display at Lord & Taylor. He left New York for San Francisco where he became well-known for his idiosyncratic approach.