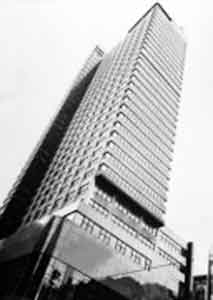 Swiss-born American architect, and is one of the pioneers of modernism in American architecture. After several years in Cleveland, Lescaze launched an independent practice with the design for the Capital Bus Terminal in New York city (1927). In 1928 he met George Howe of Philadelphia and by 1929 was involved in the partnership of Howe & Lescaze, a firm which would design the Philadelphia Saving Fund Society building, the first International Style highrise in the United States. Howe & Lescaze endured until after the PSFS Building was launched, and then each returned to private practices. In July 1933 the legal agreement to dissolve the partnership was enacted, with Lescaze retaining the office name. He would continue to use the Howe & Lescaze name until 1935, when he formally launched his own independent firm. Thereafter Lescaze was primarily associated with New York, teaching industrial design at Pratt Institute (1943-45) and receiving a Certificate of Merit Award from the New York State Association of Architects. In 1945 he established the firm of William Lescaze and Associates (with Henry Dumper).