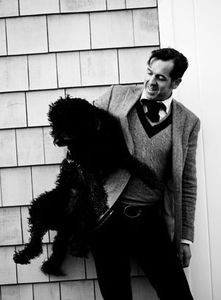 Steven Gambrel established his New York-based design firm, S. R. Gambrel Incorporated, in 1995, only three years after earning an architecture degree at the University of Virginia. Whether he's designing a polished uptown duplex, a rambling country house, or a weekend beach house, Steven serves the needs of each client with his passion for timeless, comfortable houses that improve with age. His fresh, innovative approach to color and form has been widely celebrated in magazines and newspapers, including House & Garden, Elle Decor, Interior Design, Departures, New York Times, and New York Magazine. All of his projects share a classical sensibility that comes alive with his individual mix of modern and traditional furnishings, which he often designs himself, from custom sofas and chairs to rugs and accessories. Most recently, Steven's work has appeared on the front cover of Interior Style. His own apartment in Greenwich Village was featured in House & Garden