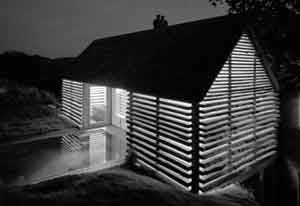 Charlotte Skene Catling has a multi-disciplinary background which began in the sciences. She trained in architecture in London, and has since worked in Berlin, Paris and London. She has written about architecture, design and fashion and has contributed to the Sunday Telegraph, and regularly to The Burlington Magazine. Among other artist collaborations, she co-wrote a film script with Malcolm McLaren on the wider issues of fashion focused through the life of Christian Dior. In 2000 she created and became director of 'Eco Lab' (PLC), an organic food, fashion and cosmetics company. Based on nutritional research using food as medicine, the overall project involved a re-examination of 'green' issues, and the creation of a new aesthetic to represent them.

Jaime de la Pena studied architecture, with Charlotte, at the University of LUestminster. He has practiced in Berlin with the Maximiliano Burgmeyer Architektburo; in Sri Lanka with Geoffrey Bawa, and in the UK with UJalters and Cohen. He set up SCDLP with Charlotte Skene Catling in 2002 and remains a regular collaborator, as well as working on his own projects in the UK, Spain and Sri Lanka.

Uanessa Perry also studied architecture at the University of LUestminster at the same time as Charlotte and Jaime. She worked with DEGUJ, and Maxwell Hutchinson, before leaving architecture for the law. She has, however, now returned to architecture to work as practice manager for SCDLP, following a decade managing, and fee-earning for, a City firm of solicitors who specialised in the area of complex crime and "white collar" fraud.