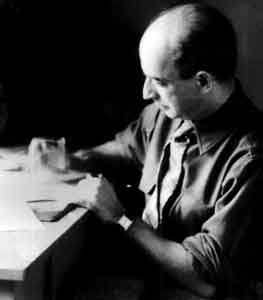 Art Deco furniture designer and maker from Vienna, Austria, was the son of a wealthy real estate speculator. After Frankl completed his architectural studies at the Berlin Polytechnic, he traveled and spent some time in Berlin and Copenhagen before arriving in the United States in April 1914. He settled in New York City and brought with him an outsider’s fresh perspective and an enthusiasm for forging a uniquely American design aesthetic. Frankl began as an architect and later switched to designing and painting fine art and furniture. In the years between the two world wars he, more than any other designer, helped shape the distinctive look of American modernism.