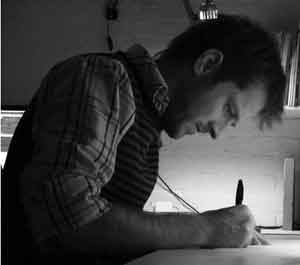 Andrew Maynard, one of Australia's brightest young architects.
Andrew Maynard Architects was established in 2002 following Andrew's receipt of the grand prize in the Asia Pacific Design Awards for his Design Pod. The core principles in the establishment of AMA was a balance between built projects and broad polemical design studies. This is demonstrated in AMA's highly crafted built work and socio-politically based concepts, both of which have been widely published and have garnered global recognition.

Andrew Maynard Architects explores architecture of enthusiasm - AMA treats each project as a unique challenge, offering unique possibilities and prides itself in experimentation. All of AMA's designs are concept rich, left of centre and sustainability conscious; styles and singular themes are avoided. AMA specialises in ideas rather than building type, whether the project be a house in Fitzroy, a library in Japan, a protest shelter in Tasmania, a plywood bicycle or a suburb eating robot.