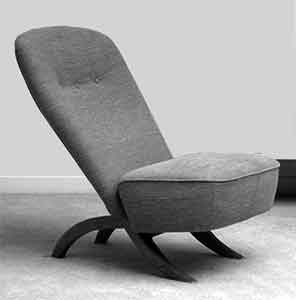 Theo Ruth may be considered as the pioneer of Artifort’s design tradition. He trained as a furniture designer and interior designer at the Middelbare Kunstnijverheidsschool in Maastricht (which later became the Academy of Applied Arts). In 1936, Ruth joined Wagemans & Van Tuinen, fi rst as a furniture maker and then, from 1939, as head of the design and development department. Ruth was the fi rst permanent designer of Artifort furniture. He made his name with what were mostly competent designs for traditional living-room furniture. His most famous chair is the 1952 Congo that enjoyed great success. Ruth led the design department until his death in 1971. Apart from producing his own designs, he also played a major role in implementing the ideas of other designers at Artifort.