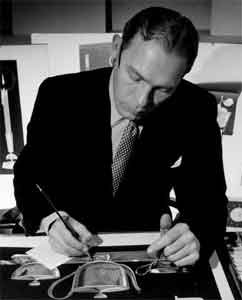 German born Tommi Parzinger settled in New York City in 1935 and began designing ceramics and metal pieces for Rena Rosenthal, whose fashionable shop on Madison Avenue specialized in gift items and decorative arts. In 1938 Parzinger began designing collections for the Charak Company of Boston, a fine furniture manufacturer known for traditional styles, that was then pursuing a more modern look that would not alienate established clientele. Having studied at the famed Kunstgewerbeschule (School of Applied Arts) in Munich, then worked in Vienna and Berlin designing porcelains for the prestigious KPM or Royal Porcelain Manufacturer, Parzinger was the perfect fit. Soon after, he found immediate success when he opened his first showroom, Parzinger Inc., in 1939. Re-christened after the war as Parzinger Originals in 1946, his showroom became a mecca for style conscious café society, and continued to supply the most discerning clientele for several decades.Parzinger is renowned for his crisp, tailored furniture and exquisite old world craftsmanship. At a time when fine materials were becoming scarce and the machine-made was no longer so novel, Parzinger’s designs with their intense workmanship—the hand-tooled leather, ornate marquetry, customized hardware—were deeply appealing to an audience in search of deeper resonance. He created a look that offered the most refined shapes along with the barest hint of exoticism through the use of strong lacquer colors, gold or precious metal nail heads, velvet-lined drawers, and the slight flip of a slender leg encased in a brass or silver shoe. When exotic woods were once again available, Macassar, madrone, Koko, fir chestnut, and mahogany became staples, and he constantly experimented with new finishes as well. By 1951 Parzinger had or was soon to establish relationships with an assortment of manufacturers, including Hofstatter (furniture); Dorlyn (brass); Willow & Reed (rattan); Lightolier (lighting); Schumacher and Katzenbach & Warren (wallpaper); and Salterini (wrought iron). He was a favorite among decorators like Billy Baldwin, and with clients such as Marilyn Monroe, and high society families like the Whitneys, the Fords, the Mellons, and the DuPonts. Parzinger belonged to an era in American design and entrepreneurship in general when optimism and opportunities for defining new ways to be creative flourished. He strove to create pieces with a singular beauty that managed to straddle past and present, connect America and Europe, and inspire sleek modern furniture with the warmth of emotion, and he achieved nothing less.