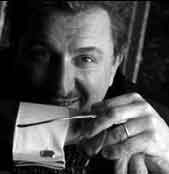 Born in the town of Cannobio, in the north of Italy, at the improbable age of eight Celeste Dell'Anna became an apprentice in the architectural studio of Luigi Curti. Armed with the advance knowledge of decorative techniques and driven by a passion for architecture, he went on to the Milan Polytechnic and the Design College of Milan, which he completed with distinction in 1976. After a fruitful collaboration in the late 1970s with the stage and set designer Gianni Quaranta, later an Oscar winner for A Room with a View, the young prodigy moved on to the Milan studio of the legendary Renzo Mongiardino, where the Manhattan residence of Stavros Niarchos and the interior of a motor yacht belonging to Count Corrado Augusta were among his first assignments. In 1983 Celeste Dell'Anna opened the doors of his own architecture and interior design practice, Studio Dell'Anna, in Milan. Here at last he could give free rein to his taste, indulging his passion for elegance and his appetite for luxury. By 1987 he had secured several important commissions, including one from the Chesa Veglia club in St Moritz and another, an innovative pavilion for a private residence, from a private client in the Cote d'Azure. "Yachts were my prolegomena," Celeste Dell'Anna recently told the wealth management quarterly Spear's. "Not only because they taught me about space, its uses and misuses, and its sublime economies at sea, where every centimetre counts the way it ought to count on land. No, they were like windows on the souls of my clients, because no house can ever bring the owner's personality to the fore the way a boat does."