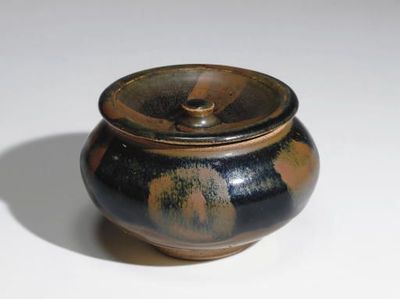 A VERY RARE RUSSET-STREAKED BLACK-GLAZED JAR AND COVER JIN DYNASTY, 12TH CENTURY Of Cizhou type, the compressed globular jar covered with a black glaze decorated with five large, evenly-spaced russet streaks below the thin brown glaze on the short neck that ends at the unglazed mouth rim, the black glaze set atop a russet glaze ending in an even line above the knife-cut foot exposing the pale brownish-grey ware, the inverted cover with knop handle similarly glazed and decorated with three russet streaks 5 in. (12.6 cm.) diam. Covered jars and bowls were popular in both northern and southern China in the Song/Jin period. Scholars have suggested these vessels were used for holding water in the making of tea. Water was stored in large jars to allow the impurities to settle to the bottom, and when water was required for tea some was ladled out into one of these small covered jars. Dark-glazed vessels of this type, with large, evenly-spaced russet splashes, usually numbering between three and five, were popular wares produced at various Cizhou-type kilns in the north in the twelfth and thirteenth centuries. Two jars of similar shape, but with smaller russet splashes and lacking their covers, are illustrated by R. Krahl, Chinese Ceramics from the Meiyintang Collction, vol. 1, London, 1994, p. 254, nos. 460-1.