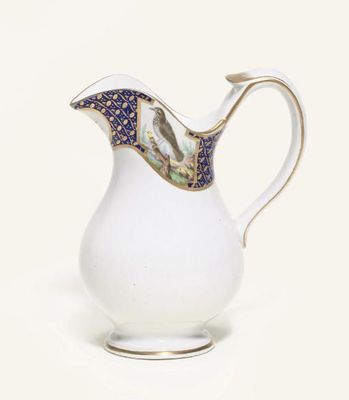 A TOURNAI BALUSTER JUG FROM THE DUC D'ORLEANS SERVICE CIRCA 1787-1792, INCISED WITH A REVERSED S The body with a flared spout and a strap handle, the dark-blue band border gilt with ovolo and foliate ornament and reserved with two cruciform panels and two circular panels, the two cruciform panels finely painted 'aux oiseaux de Buffon' named on the underside, one with a male bird, the other with a female, each perched on a bare branch in a rocky wooded landscape within gilt band cartouches, the circular panels below the lip and below the upper handle terminal each with a moth, the handle with gilt palmettes and dot ornament, gilt line rims, the underside inscribed jeune gorge bleue and gorge bleue femelle in black script (minute scratch to one vignette, flake to gilt cartouche) 5 1/8 in. (13 cm.) high The present 'pot pansu' of the second size is part of an extensive dinner, dessert, breakfast, tea and coffee service which was ordered by Philippe duc d'Orleans in 1787 and consisted of 1,603 pieces. Traditionally the service was said to have been commissioned following a wager between the duc d'Orleans and Louis XVI, though scholars now question the verity of this anecdote. However, the diversity and abundance of elaborate gilded borders, the use of coats of arms and grisaille portraits gives the service the air of a magnum opus. The extensive use of the comte de Buffon's Histoire Naturelle des Oiseaux published in ten volumes between 1770 and 1786, parallels the production of services at S