A 'FAMILLE-ROSE' BOWL WITH WESTERN FIGURES 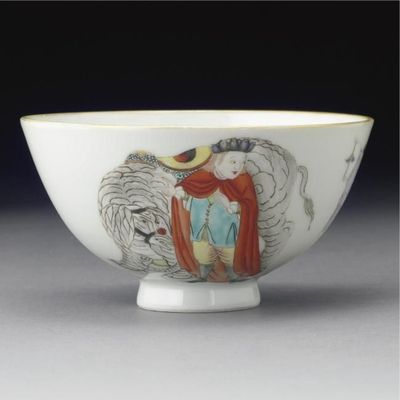 A 'FAMILLE-ROSE' BOWL WITH WESTERN FIGURES QIANLONG SEAL MARK AND PERIOD the U-shaped sides featuring a European gentleman in a foliate crown and an iron-red cape standing by a caparisoned elephant, both facing a second European man holding a vase with a ruyi scepter suspending a jade gong tassel next to a striding hound, the scene completed with a lingzhi fungus spray, the interior left plain with gilding around the mouth rim, all supported on a short slightly splayed foot 11cm