A CHINESE EXPORT TEA CANISTER CIRCA 1740 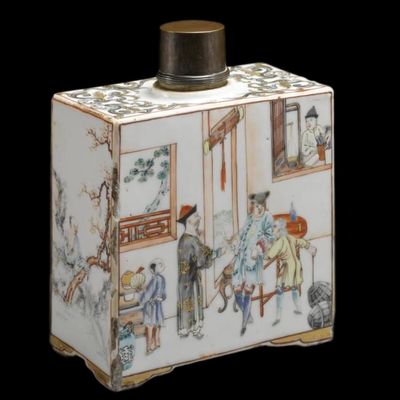 A CHINESE EXPORT TEA CANISTER CIRCA 1740 LOT 153 A CHINESE EXPORT TEA CANISTER CIRCA 1740 40,000—60,000 USD REGISTER FOR A PADDLE READ CONDITION REPORT TRACK LOT EMAIL THIS LOT TO A FRIEND BUY CATALOGUE CONVERT CURRENCY KEY TO LOT SYMBOLS MEASUREMENTS measurements height overall 6 1/8 in. alternate measurements 15.5 cm DESCRIPTION painted on the front with a scene of a European supercargo smoking a pipe, looking toward his assistant and transacting business with a Chinese merchant while another seated beside a scale observes from a window above, the reverse with another interior scene of two European men and a Chinese man seated at a table and enjoying a glass of punch while one attendant holds a pipe and another brings a tray of covered cups, the ends painted with a Chinese man either walking near a bridge or seated beside a tree, and the flat shoulder with grisaille and gilt foliate scrollwork. Together with a later silvered copper cover. Fritting and some chips along the edges. 2 pieces. PROVENANCE The collection of F. W. J. Scovil, Esq., sold, Christie's, London, March 19, 1979, lot 96 The collection of François Hervouët, Belgium, sold, Sotheby's, Monte Carlo, June 22, 1987, lot 1559 EXHIBITED London, A Tale of Three Cities, 1997, no. 44 New York, International Asian Art Fair, 2002 LITERATURE AND REFERENCES François and Nicole Hervouët and Yves Bruneau, La Porcelaine des Compagnie des Indes a Décor Occidental, p. 31, no. 1.35 a, b, and illustrated on the dust jacket David S. Howard, A Tale of Three Cities: Canton, Shanghai & Hong Kong, p. 49, no. 44 CATALOGUE NOTE Rare in its form, this tea canister appears to be unique in its decoration. Howard (see Literature above) notes that "this is also one of the earliest examples of European merchants painted in famille-rose enamels in a meaningful and realistic situation." Only two other scenes are known on Chinese export porcelain showing commercial transactions between European and Chinese merchants, both illustrated by Hervouët and Bruneau, who comment on how unusual it is to find any depictions of European and Chinese figures together. Of these two other scenes, one depicts a European and a Chinese merchant seated in a warehouse in which tea is being packed, and appears on a teabowl and saucer illustrated ibid., p. 32, no. 1.37, and sold at Christie's in New York on January 21, 1999, lot 70. The second scene shows several Europeans conversing with Chinese salesmen in a general goods shop with porcelain, canisters of tea, bolts of fabrics and other goods on the shelves, depicted either in two oval panels, as on the teabowl in the Princessehof Museum, Leeuwarden, illustrated ibid., p. 30, no. 133; and by Beurdeley, p. 149, cat. 1; by Jörg 1982, p. 133, figs. 53 and 54; and by Lunsingh Scheurleer, pl. 57; or in one large scene as on the saucer in the Metropolitan Museum of Art, illustrated by Hervouët and Bruneau, p. 30, no. 1.34, and also illustrated with its teabowl by Phillips, frontispiece. A teabowl in the Rijksmuseum, Amsterdam, exhibiting the two scenes, also enclosed by gilt scrollwork, is illustrated by Jörg 1997, p. 288, no. 336a and 336b, who notes that such wares were "once part of one or more sets ordered by a Dutch (?) merchant as a souvenir of his stay in China, perhaps depicting himself in the very act of buying the set." Another teabowl of that type is illustrated by Howard and Ayers, Vol. I, p. 213, no. 211, and along with its saucer was in the collection of Mr. and Mrs. Rafi Y.Mottahedeh, sold in these rooms on October 19, 2000, lots 190 and 191, respectively. A teabowl and saucer are illustrated by Hyde, p. 19, pl. I; and another was sold at Christie's in New York on January