A RARE RUBY-RED GLAZED CUP MARK AND PERIOD OF YONGZHENG 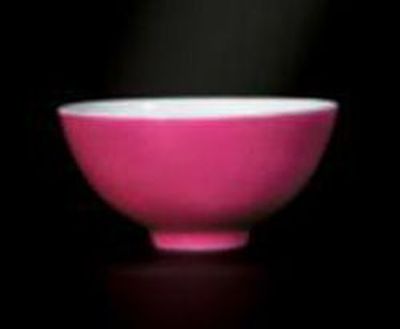 A RARE RUBY-RED GLAZED CUP MARK AND PERIOD OF YONGZHENG finely potted with rounded thin sides springing from a small footrim, covered overall on the exterior with a rich, ruby-coloured glaze, the interior glazed white, the mark inscribed in four characters with a double square on the base 6.5cm It is rare to find a ruby-glazed cup of such small size and with a Yongzheng four-character reign mark, although one slightly larger cup with an apocryphal Chenghua mark, in the National Palace Museum, Taipei, was included in the Special Exhibition of Ch'eng-hua Porcelain, National Palace Museum, Taipei, 1976, cat. no. 155; and a pair was sold at Christie's London, 14th July 1980, lot 286. Compare also shallower ruby-red glazed cups with six character Yongzheng marks such as a pair published in The Tsui Museum of Art, Hong Kong, 1991, pl. 126; and another illustrated in Shoudu Bowuguan cangci xuan, Beijing, 1991, pl. 147, in the Capital Museum, Beijing.