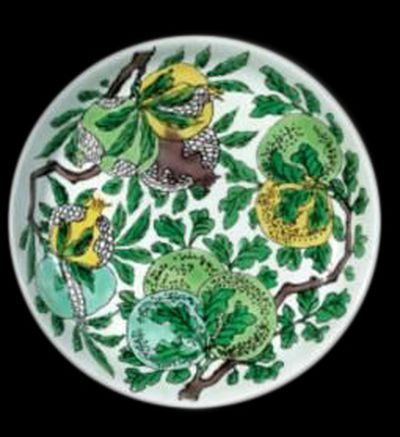 A 'FAMILLE-VERTE' BISCUIT-ENAMELLED DISH MARK AND PERIOD OF KANGXI of shallow rounded form rising to a slightly everted rim, the interior with quinces and pomegranates borne on leafy branches painted in vibrant tones of yellow, green and aubergine, the centre incised with a writhing five-clawed dragon in pursuit of a flaming pearl amidst cloud and fire scrolls, the cavetto with two similar dragons, painted on the exterior with camellia and peony sprays, incised with two further dragons above a band of lotus lappets above the foot, the base inscribed in underglaze-blue with a six character mark within double-circles Engraved decoration is frequently found on Qing monochromes employing the low-fired enamel glazes of the 'famille-verte' palette, yellow, aubergine and green, which were applied directly to the biscuit porcelain after the first high temperature firing. The very thin translucent enamels allow the engraving to show much more clearly than it does through a normal white glaze. This variation of anhua or hidden decoration was perhaps inspired by paintings on silk with a woven design. As is often the case wtih botanical subjects on Chinese porcelain, the identification of the fruit and flowers is not obvious. The rounded fruit which accompany the pomegranates are usually identified as peaches, though they lack the characteristic pointed top to the fruit. It has also been suggested that they may be tangerines but it seems more probable that they are in fact quinces, or in Chinese, wenbo. The two flowering branches on the reverse of the dish, often called camellia and peony, may then plausibly be identified as the flowers corresponding to the two fruit, the pomegranate with double flowers and the qunice with single petals around a cluster of stamens in the centre. Dishes of this type were made in considerable numbers in the Kangxi period, showing much variation in the details of the design. The painted fruit vary in number, from four to six pomegranates and from five to seven quinces, some with the addition of small pomegranate flowers. There also seems to be little consistency in the colouring of the individual fruit. During the Kangxi period, in contrast to later Qing reigns, the decorators working at the Imperial kilns at Jingdezhen appear to have been given considerable latitude in the way in which a design was executed, though the variations on the biscuit dishes are probably also due to official revisions made to the design over an extended period of manufacture. The present dish belongs to a type with five pomegranates and five quinces. Similar dishes are held in several major collections, including one in the Hong Kong Museum of Art and exhibited in Splendour of the Qing Dynasty, Hong Kong Kong Museum of Art, Hong Kong, 1992, cat. no. 144; one in the Nanjing Museum, exhibited in Qing Imperial Porcelain, Nanjing Museum, Nanjing, 1995, cat. no. 29; and a third from the Shanghai Museum Collection, illustrated in Kangxi Porcelain Wares from the Shanghai Museum Collection, Shanghai, 1998, pl. 144. Compare also a dish from the T. Y. Chao collection, sold in these rooms, 19th May 1987, lot 302.