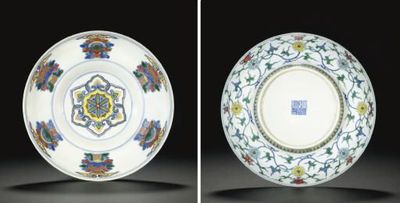 A DOUCAI OGEE-FORM BOWL QIANLONG SEAL MARK IN UNDERGLAZE BLUE AND OF THE PERIOD (1736-1795) The center decorated with a flower head encircled by six linked ruyi heads below six stylized flower sprays in the curved well, the exterior decorated with a band of lotus meander bearing eight blossoms, each positioned below one of the Eight Buddhist Emblems, with a narrow band of petal lappets encircling the foot, with gilt highlights 9 in. (22.8 cm.) diam. Provenance Old English Collection. Lot Notes The design of the central medallion and of the unusual floral sprays around the cavetto are Qing dynasty adaptations of a Chenghua prototype. Compare the present lot with a small doucai Chenghua-marked saucer from the Percival David Foundation, London, illustrated by R. Scott, Flawless Porcelains: Imperial Ceramics from the Reign of the Chenghua Emperor, Singapore, 1995, pl. 25. The Ming dynasty prototype has a central medallion with interlinked ruyi-heads, while the exterior is enhanced by lingzhi sprays. Now more elaborate, the Cheng-hua inspiration is nevertheless evident.