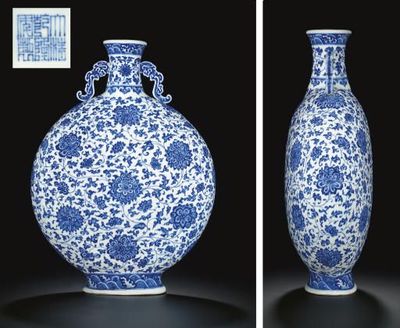 A VERY RARE LARGE BLUE AND WHITE MOONFLASK QIANLONG SEAL MARK IN UNDERGLAZE BLUE AND OF THE PERIOD (1736-1795) Well painted in fifteenth century style in rich underglaze blue with simulated 'heaping and piling' with an allover pattern of composite foliate meander, the penciled, scrolling, leafy stems bearing a central lotus blossom surrounded by six further flowers on each side and three flowers on the narrow sides below the dragon handles, each stem terminating in a smaller blossom, above a band of froth-capped waves encircling the rounded rectangular foot, repeated on the waisted neck above another band of flower scroll and a ruyi-head border 21 3/8 in. (54.3 cm.) high Lot Notes This large, rare, and magnificent flask is a testament to the superb craftsmanship of the potters at the Imperial kilns in the Qianlong reign. The shape is well potted, and the decoration - painted in the finest cobalt - is extremely well painted, while the decorative scheme is beautifully balanced to complement the form of the flask. Both the shape of the flask and the mixed floral scroll that provides its main decoration take their inspiration from Ming 15th century Imperial porcelains. The Qianlong Emperor greatly admired 15th century blue and white porcelains and had a considerable number in his collection. Indeed a 15th century blue and white moonflask, with scroll handles on either side of the neck and decorated with a floral scroll, appears on a table with other antiques to the right of the Emperor in an anonymous portrait entitled One or Two - Painting of the Emperor Qianlong Appreciating Antiques in the collection of the Palace Museum, Beijing, illustrated in The Golden Exile - Pictorial Expressions of the School of Western Missionaries' Artworks of the Qing Court, Museu de Arte de Macau, 2002, no. 41. The 15th century moonflasks did not have discernable foot rings, and indeed many of the 18th century blue and white flasks appear to have little in the way of a foot below the lower edge of their circular bodies. A Yongzheng blue and white vase of this shape illustrated in Chinese Porcelain - The S.C. Ko Tianminlou Collection, part II, Hong Kong Museum of Art, Hong Kong, 1987, p. 80, no. 54, is decorated with a mixed floral scroll of the flowers of the four seasons. A Qianlong version of this low-footed form, also decorated with a mixed floral scroll from the T. T. Tsui Collection is illustrated in The Tsui Museum of Art - Chinese Ceramics IV - Qing Dynasty, Hong Kong, 1995, no. 74. A smaller, low-footed, Qianlong flask in the Tianminlou Collection is interesting because it shares with the current flask, not only the form of its dragon handles and mixed floral scroll disposed over the body, but also a wave band around the mouth and base, illustrated in Chinese Porcelain - The S.C. Ko Tianminlou Collection, op. cit., p. 92, no. 65. The same handles, wave bands and low-footed shape can be seen on a larger Qianlong flask from the Chang Foundation Collection illustrated in Selected Chinese Ceramics from Han to Qing Dynasties, Taipei, 1990, pp. 334-5, no. 148. On this flask, however, the mixed floral scroll is restricted to the sides, and the front and back have a design of phoenix and dragon. Both of these last two flasks have archaistic plantain leaf bands around the neck. The flasks with taller flared foot, like the current example, may have been developed for greater stability, to give a more pleasing balance to the form, or may simply have been a response to the fashion for displaying objects on stands. A large Qianlong flask, although still slightly smaller than the current vessel, with the taller, flared, foot in the collection of the Shanghai Museum is illustrated by Liu Liang-yu in A Survey of Chinese Ceramics 5, Ch'ing Official and Popular Wares, Taipei, 1991, p. 152, upper image. This flask shares the same basic form as the current vessel, but the dragon handles are in the form of chi dragons, rather than being the flattened archaistic type seen on the other flasks, and the vase is covered with a floral scroll, except for the circular panels front and back, which contain peaches, bats and waves. Another large flask with the taller, flared foot, which is only slightly smaller than the current example, with a design of dragons in clouds above waves, was sold at Sotheby's, London, 7 November 2007, lot 407. The current moonflask appears to be the largest of the published flasks of this type, and its design of six mixed blossoms encircling a seventh blossom is a particularly pleasing decoration for this form. The floral scroll on the neck complements the body design, while the narrow, but bold, wave bands at mouth and foot provide an effective counterpoint to the more delicate floral scrolls.