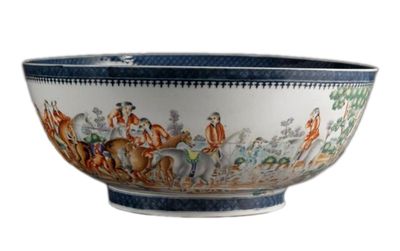 A CHINESE EXPORT HUNTING PUNCH BOWL CIRCA 1785-90 painted around the exterior with a continuous scene separated by trees into two views, one depicting the hunt gathering in the morning, and the other with the huntsmen and hounds surrounding the captured fox beneath an underglaze-blue trellis diaper border edged with spearheads showing traces of gilding around the rim and repeated on the interior rim above a central scene of two sportsmen and their pack, one man aiming at a pheasant in a tree. Minor chip. PROVENANCE Sold, Sotheby's, London, April 20, 1971, lot 181 Property of a Collector, sold, Christie's, New York, January 29, 1980, lot 148 Sylvia Tearston Antiques, New York CATALOGUE NOTE Both sides of a punch bowl decorated with the same scenes are illustrated by Hervouët and Bruneau, p. 77, no. 3.32. A differently bordered but similarly decorated punch bowl is illustrated by Phillips, p. 186, pl. 88; and another identical to that example is illustrated by Palmer, p. 125, color pl. 13, who also illustrates the center of the interior inscribed SUCCESS TO THE SOUTHERN HUNT encircling the initials DW, and remarks that "fox hunting had been popular in the American South since colonial days, and several hunt bowls are known that have Southern histories," although this bowl equally could have been ordered for an English client, particularly in light of the initials DW, which Ms. Palmer asserts are "probably [those of] the master of the 'southern hunt' for which [that] bowl was made," although it seems more than coincidental that the hunting bowl in the preceding lot also is initialed DW