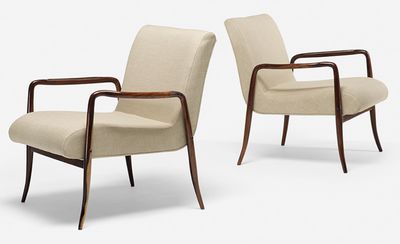 This pair of light armchairs was created by the Brazilian designer Joaquim Teneiro en 1942.
Tenreiro was among the first designers in the Brazilian furniture industry to adopt a European modernist vernacular. His initial efforts, including the 1942 "Poltrona Leve," met with considerable success, and in 1943 he established his own firm with factories in Rio de Janeiro and São Paulo. One of his main clients was Brazilian architect Oscar Niemeyer, for whose houses a number of pieces were originally commissioned. (source: Wikipédia)