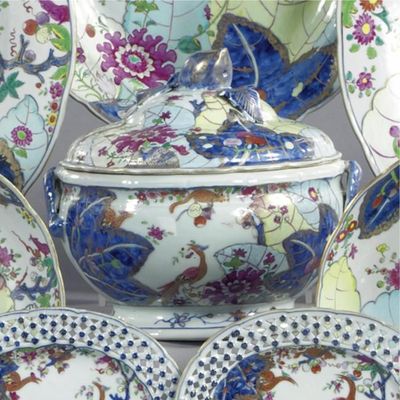 A CHINESE EXPORT 'TOBACCO LEAF' PATTERN CIRCULAR SOUP TUREEN, COVER AND STAND painted on the front and reverse of the body and across the scallop-edged cover and stand with two squirrels (or "tree rats") perched on a branch above a pair of Chinese pheasants amidst a profusion of large and small blossoms and leaves, the underglaze-blue double-S-scroll handles and peach-sprig knop heightened in gilding, the foot of the tureen and the underside of the stand with three underglaze-blue and iron-red flowering prunus branches. PROVENANCE The Collection of Jaime Ortiz-Patiño, sold at Sotheby's, New York, April 25, 1998, lot 2 CATALOGUE NOTE A plate in this pattern, from the collection of Mrs. Lytle Hull, sold in these rooms on September 23, 1977, lot 157, is illustrated by Forbes, p. 25, no. 19, who ascribes it a date of circa 1760, and comments that based on the complexity of this and the more traditional 'Tobacco Leaf' pattern, "both may have been the special province of a particular group of artisans at Ching-te Chên [Jingdezhen]. This fact is reinforced by the use of three carefully-painted underglaze-blue and iron-red enamel prunus sprays on the underside of the rim - a device seldom, if ever, used in export ware after the Yung-chêng [Yongzheng] period, except with these and other related 'Tobacco Leaf' patterns. [This particular] design suggests the influence of Western perspective; [and] the light-hearted gaiety and asymmetry evident here would have touched a responsive chord in Europe, which was producing its own asymmetrical rococo designs" at this time. Without any convincing prototypes, the question of the true origin of the 'Tobacco Leaf' patterns, which actually may derive from Indian fabrics, will continue to haunt collectors, as will the question of accurate dating. Probably the most reliable clue to the date of production comes from the various forms found with this decoration - in this instance the soup tureen and particularly the pair of baskets in the following lot. The baskets presumably derive from English porcelain examples, probably Worcester, circa 1765-75. From other designs found on similar Chinese Export baskets, largely Nanking blue and white patterns of the 1780s and '90s, it is fair to assume that even if the 'Tobacco Leaf' patterns were the earliest decoration used on this form in Chinese Export porcelain, they still are not likely to date prior to 1770, and are more likely to date from 1775 or 1780. Various dinner wares in this version of the 'Tobacco Leaf' pattern are illustrated by Godden, p. 176, pl. 85; by Jörg 1989, p. 105, no. 30 (top left); by Mudge, p. 162, color fig. 254 (front, right); by Guedes et al., p. 143; by Litzenburg and Bailey, p. 225, no. 231; and in the Reeves Collection, p. 13, fig. 12, cat. 34. Veiga, p. 262, color pl. 240, illustrates an oval platter in a variation of this pattern, and on p. 263, color pl. 241, one of a pair of plates from his own collection, sold at Sotheby's in London on October 31, 1989, lot 56. Another soup tureen, cover and slightly smaller stand, otherwise identical to the present example, were sold at Sotheby's in London on June 16, 1999, lot 982.