A BLUE AND WHITE TRANSITIONAL BRUSHPOT, CHINA, CIRCA 1640 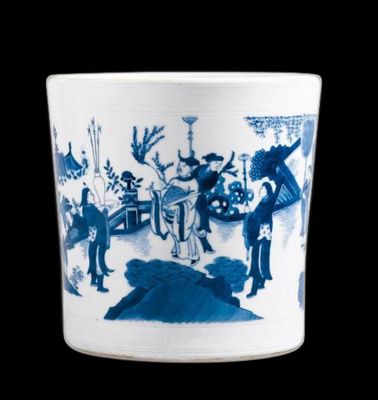 A BLUE AND WHITE TRANSITIONAL BRUSHPOT, CHINA, CIRCA 1640 Painted to the exterior with an official with attendants in a garden, being presented with a meiping vase with three arrows, in a mountainous river landscape The scene shows an official carrying a meiping vase with three arrows representing halberds "May you rise three steps in rapid succession". The vase stands for a level position which would mean that the official in the scene who is about to receive the jar is getting promoted. The brushpot was made during the Chongzhen period (1628-1644) and was made to be given to highly-ranked government officials with the purpose of wishing them well for their future career 20.6cm