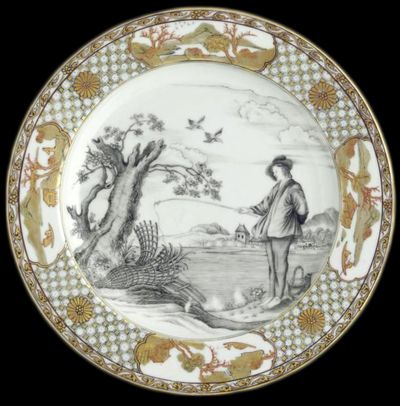 A CHINESE EXPORT 'LE PÊCHEUR' PLATE CIRCA 1740 painted en grisaille with a man fishing in a river with rural buildings on the far bank, the rim with a grisaille and gold cell diaper ground reserved with four Chinese riverscape panels heightened in iron-red and alternating with gilt chrysanthemum blossoms within a floral vine border. CATALOGUE NOTE An identical plate is illustrated by Lunsingh Scheurleer, pl. 206, who also illustrates in pl. 207 the engraving by Claes Jansz. Visscher de Jonge (1586/7-1652) after the drawing by Abraham Bloemaert (1566-1651) from which the decoration was taken. As Le Corbeiller 1973, p. 41 observes, the Bloemaert drawing was first engraved by his son, Cornelis Bloemaert II (c. 1603-84?), and the Visscher engraving probably was taken from that initial Bloemaert engraving, inasmuch as it has returned to the same image as the original drawing. This scene was copied onto Chinese export porcelain in three palettes: polychrome, grisaille and rose camaïeu, of which the polychrome versions were the earliest, and appear to follow the original most closely, although in mirror image. Howard 1994, p. 83, no. 67, who illustrates a polychrome example (the same plate illustrated by Fuchs, p. 65, no. 27), suggests on p. 82 that "after the initial possibly V.O.C. order, variations would have been available to private merchants in Canton, probably with less expensive borders," presumably referring to the slightly later versions in grisaille and rose camaïeu. While both the grisaille and rose camaïeu examples depict the same scene as the polychrome plates, they occasionally show minor alterations, such as the transformation of the original Dutch-style landscape in the distance into a Chinese-style mountainous terrain. Additionally, the grisaille-decorated pieces exist with two different border styles: the cell diaper pattern identical to the earlier polychrome dishes (as seen on the present plate), and a strapwork pattern as seen on the rose camaïeu examples. 23cm