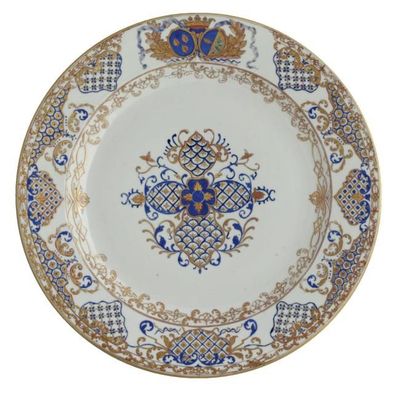 A CHINESE EXPORT ARMORIAL LARGE PLATE CIRCA 1740 painted in blue enamel and gold delineated in iron-red in the center with a patterned quatrefoil floral medallion, on the cavetto with a scroll and strapwork border repeated around the rim edge above a wide border of diapered panels interrupted at the top with the crowned arms of Ribbing accollée with Piper between gilt boughs and fluttering ribbons CATALOGUE NOTE A pair of plates from this service was offered for sale at Christie's in London on November 16, 1999, lot 384, and the catalogue note stated that the arms "are those of the Swedish familes of Ribbing and Piper, and the service was made for Bengt Ribbing (1686-1741) and Ulrika Eleonora Piper (1698-1754) for their wedding in 1718. A soup plate from this service is illustrated by Bo Gyllensvärd, Porslinet från Kina (ICA Bokförlag, 1990), p. 150, fig. 307." The unusual patterned-panel decoration of the service may have been inspired by the designs drawn by Christian Precht (1706-79), a Stockholm jeweler, for a service to be made in China and "discharged by Count Axel Sparre on his voyage to the Indies in 1736," presumably with the Swedish East India Company; see Beurdeley, p. 117, fig. 84 for the Precht drawing and p. 118 for a brief discussion of the drawing and the service's maquette preserved in the castle of Maltesharm in Skania, Sweden. Stylistically 1718 seems considerably too early for this service, which is more likely to have been made for a later occasion, such as a 20th or 25th wedding anniversary in 1738 or 1743 during the period when strong blue enamel decoration was particularly favored. 35cm