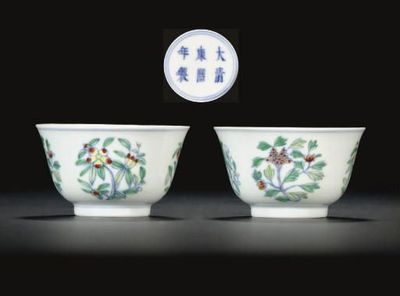 A PAIR OF CHENGHUA-STYLE DOUCAI WINE CUPS KANGXI SIX-CHARACTER MARKS IN UNDERGLAZE BLUE WITHIN A DOUBLE CIRCLE AND OF THE PERIOD (1662-1722) With deep sides flaring slightly towards the rim, each delicately decorated with four different flower-sprig roundels, within double blue line borders 2 7/8 in. (7.3 cm.) diam. (2) The emperors of the Qing dynasty were avid antiquarians, and frequently Ming dynasty decorations were reproduced on Imperial wares. The decoration of the present lot, with floral sprays in the doucai palette within double and single line borders, is a pattern seen on porcelain of the Chenghua period (1465-1487), which was often imitated during the reign of the Kangxi emperor. See a Chenghua period doucai cup with floral sprays related to those found on the current cups, illustrated in Catalogue of the Special Exhibition of Ch'eng-Hua Porcelain Ware, Taipei, 2003, p. 187, no. 195. Compare another Chenghua period cup with similar decoration, also providing the origin of these wares, illustrated in A Legacy of Chenghua, The Tsui Museum of Art, Hong Kong, 1993, p. 286, no. C99.