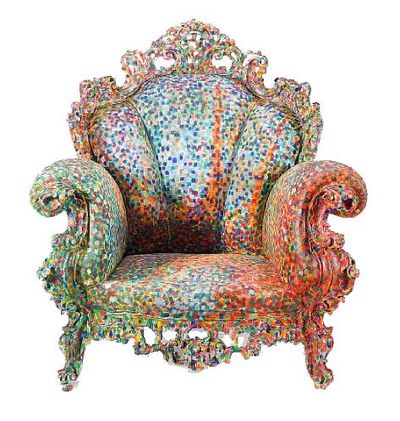 Alessandro Mendini for Studio Alchymia, 'Proust's Armchair', designed and executed circa 1978 hand painted decoration to readymade chair 107cm is still being mass-poduced today... The first "Poltrona di Proust" was made in 1978 as one of the elements for my "Sala del Secolo" ("Room of the Century"), which also included pieces constructed by Alchimia. The exhibition "Incontri ravvicinati di architettura" was held in Ferrara, in the Palazzo dei Diamanti, with Andrea Branzi and Ettore Sottsass Jr. Later that year, the room was brought to the Biennial of Venice. I bought the unfinished chair in Veneto and had it decorated by hand by Prospero Rasulo and Pier Antonio Volpini.