A CHINESE EXPORT PLATE CIRCA 1785 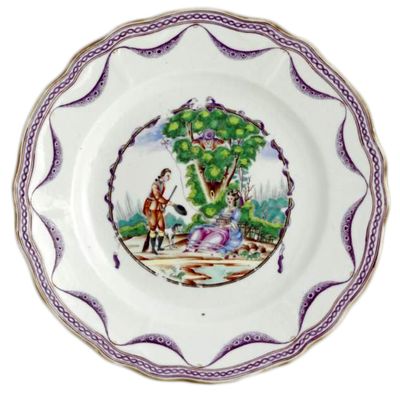 A CHINESE EXPORT PLATE CIRCA 1785 painted with a figure in a tree spying on a sportsman doffing his hat to a lady seated on the ground below with a birdcage in her lap and a bird flying on a tether in her right hand, woods in the distance within a gilt roundel entwined with a purple ribbon, the lightly molded rim with a purple floral garland suspended from a gilt line beneath a cable border on the wavy edge. Minor chips. An identical plate is illustrated by Beurdeley, p. 178, cat. 127, who suggests that the decoration was "inspired by a print by [Jean Michel] Moreau Le Jeune [1741-1814] about 1760." Judging from the variety of pieces in this pattern that have appeared on the market over the years, it was either a popular pattern or a very large service for dinner, dessert tea and coffee, including tureens, vegetable dishes, sauceboats, platters, plates, pots de crème, reticulated baskets with stands, and tea and coffee wares. An oval platter is illustrated by Forbes, p. 43, no. 75; and another illustrated by Hervouët and Bruneau, p. 72, no. 3.18, was in the collection of François Hervouët, sold at Sotheby's in London on November 3, 1987, lot 806. Hyde, Silva and Malta, p. 47, pl. IX illustrate a reticulated oval stand; and Phillips illustrates an oval soup tureen and stand, p. 76, color pl. 10. Veiga, p. 165, pls. 136 and 137 illustrates a soup plate and a coffee cup and saucer in this pattern from the Helena Woolworth McCann Collection at the Metropolitan Museum of Art, sold in these rooms on January 30, 1985, lots 132, and 133, and subsequently in the collection of Jorge Getulio Veiga, sold at Sotheby's in London on October 31, 1989, lots 259 and 261. Another soup plate from the McCann Collection at the Joslyn Memorial Art Museum in Omaha, Nebraska, was sold in these rooms on January 18, 1997, lot 1341