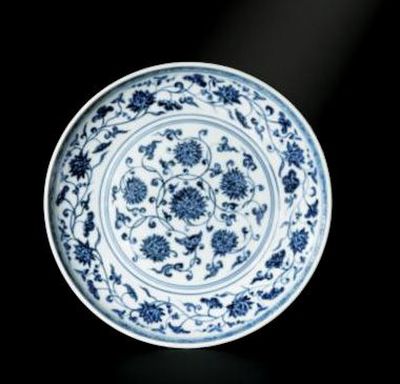 BLUE AND WHITE 'LOTUS' DISH MING DYNASTY, YONGLE PERIOD the low rounded sides rising from a short foot, finely painted in contrasting tones of underglaze-blue with characteristic 'heaping and piling', decorated on the interior with a central medallion enclosing five large lotus blooms emitting intertwining leafy stems within triple line borders, surrounded in the cavetto by a continuous lotus meander beneath a classic scroll band at the lip, with a similar chrysanthemum scroll on the exterior between a classic scroll around the foot and a keyfret at the rim EXHIBITED The Exquisite Chinese Artifacts. Collection of Ching Wan Society, National Museum of History, Taiwan, 1995, cat. no. 90. LITERATURE AND REFERENCES The Leshantang Collection of Chinese Porcelain, Taipei, 2005, cat.no. 5. CATALOGUE NOTE The present dish exemplifies the quality and simple vigour that characterises Jingdezhen blue and white porcelain of the Yongle period, with the lotus scroll motif expertly painted and positioned that is aesthetically most pleasing. The design appears to spread into the surrounding space with rhythmic dynamism. While plants on 15th century porcelain are generally naturalistically rendered, the lotus is commonly depicted in a stylised form with curly decorative leaves, as seen on the centre of this piece. Dishes of this type were made for the court as well as for the export market, transported mainly to the Middle East via the great naval expeditions of Admiral Zhenghe. For another related example, see a dish sold in our London rooms, 14th March 1972, lot 129, forme