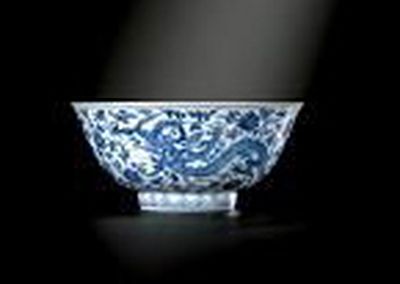 A RARE BLUE AND WHITE 'DRAGON' BOWL TRANSCRIBED MARK AND PERIOD OF ZHENGDE finely potted with deep rounded sides rising from a high foot to a slightly everted rim, boldly and freely painted in soft tones of cobalt-blue with characteristic 'heaping and piling', the exterior with a pair of five-clawed dragons, their scaly, sinuous bodies prancing amid slender, undulating lotus scrolls, all above a band of ruyi heads at the foot, the interior with a central medallion enclosing a further dragon writhing amid lotus scrolls, the base inscribed with the four Phags-pa characters within double circles The dragon and lotus design was one of the favourite designs of the Zhengde emperor. Although this style of dense decoration was employed on a range of wares made for the Zhengde court, such as bowls, dishes, ewers and stemcups, it is rare to find the dragon and lotus pattern on only the exterior, with a central dragon medallion decorating the interior. An identical but smaller example, excavated from the waste heaps of the Ming imperial kilns at Jingdezhen was included in the exhibition Imperial Porcelain: Recent Discoveries of Jingdezhen Ware, Museum of Oriental Ceramics, Osaka, 1995, cat. no. 172; and another slightly larger bowl, also with Pagspa script reign mark on the base, from the Palace Museum, Beijing, is illustrated in The Complete Collection of Treasures of the Palace Museum. Blue and White Porcelain with Underglaze Red, vol. 2, Shanghai, 2000, cat. no. 70. It is unusual to find a sixteenth century reign mark written in Phag-spa script. Developed by Phag-spa (1235-80), a Tibetan lama who had considerable influence on politics and religion during the Yuan dynasty, it was adopted in 1269 as China's official script of administration for a short period and is sometimes found on Yuan dynasty celadons. As the Zhengde emperor had an interest in foreign scripts and languages, it seems likely that he commissioned dishes and bowls with this mark, possibly to present as gifts to lamas who were invited to live in Beijing during his reign. See Jessica Harrison-Hall, Ming Ceramics, London, 2001, pp. 206-7. The same mark is seen on a dish with very similar dragon and lotus decoration in the Freer Gallery of Art, Washington D.C., illustrated in Oriental Ceramics. The World's Great Collections, vol. 9, Tokyo, 1981, no. 109; and on a bowl in the British Museum, illustrated and discussed by R.L. Hobson, 'Chinese Porcelain Fragments from Aidhab and Some Bashpa Inscriptions', The Transactions of the Oriental Ceramic Society, London, 1926-27, pl. VI, fig. 2 and p. 21, decorated with dragons in green-glaze on the exterior on a yellow ground. Blue-and-white Zhengde wares with both the exterior and interior painted with similar dragon and lotus design, were also made with the Zhengde mark written in Chinese characters, such as a bowl of broader proportions with a four character Zhengde reign mark, illustrated in Minji meihin zuroku, vol.II, Tokyo, 1977, pl. 91; and another from the Palace Museum, op. cit. cat. no. 71.