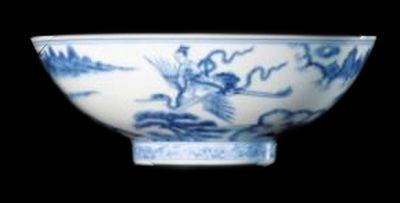 A FINE BLUE AND WHITE BOWL QING DYNASTY, KANGXI / YONGZHENG PERIOD finely potted with gently rounded sides supported on a short foot, the exterior delicately painted in soft tones of underglaze-blue with a continuous scene depicting Xi Wang Mu riding on a crane towards a pavilion opening onto a balustraded garden with paulownia and pine trees, with high mountain peaks and rolling clouds rising in the distance, the foot with a classic scroll, the interior left undecorated and glazed white, the base inscribed with an apocryphal six-character Xuande mark Ming imperial porcelains of the Xuande period represent a peak of quality, beauty and inventiveness in the history of Chinese ceramics, and later emperors referred back to wares of this period as seen in this fine piece. The Daoist image of the goddess Xi Wang Mu riding a crane above a pavilion copies exactly the original, including the six character reign mark of Xuande on the base.