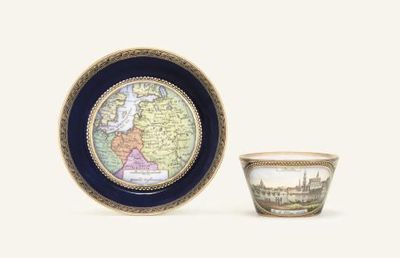 A MEISSEN DOCUMENTARY TOPOGRAPHICAL BLUE-GROUND CABINET-CUP AND SAUCER CIRCA 1813, BOTH PIECES WITH BLUE CROSSED SWORDS, STAR AND 4 MARKS, IMPRESSED B, VARIOUS PRESSNUMMERN AND GILDER'S 115 MARKS The conical cup with an angular channelled gilt-edged handle, the front and the gilt vitrvian scroll border reserved with a view of Dresden across the Elbe, named Dresde. above and dated le 5. Mai 1813. below in black script, in an oval gilt band and beaded cartouche, the interior with a gilt ombrierte AB monogram, the saucer with a central medallion with a map of Northern Europe including Saxony and part of Russia, reserved below with a panel enclosing a scale rule and the inscription Werstes and quelle distance, within a similar cartouche and border (rims with minute flaking) Lot Notes 1813 saw much military activity in Dresden. The War of the 'Sixth Coalition' (1812-1814) brought Austria, Prussia, Russia, Sweden, Britain and some of the German States together in the struggle to defeat Napoleon. The two-day battle of Dresden in August 1813 was the final large-scale victory in Napoleon's military career, before he was defeated at the 'Battle of the Nations' at Leipzig in Saxony.