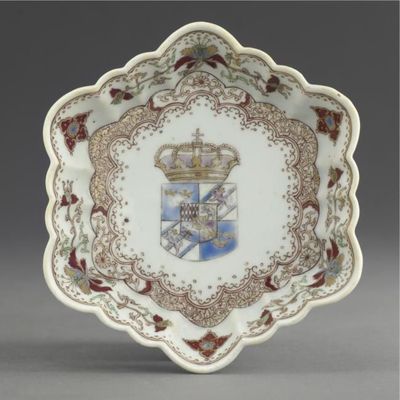 A CHINESE EXPORT ARMORIAL FLUTED HEXAGONAL TEAPOT STAND CIRCA 1730-35 painted in the center with the Royal Arms of Sweden within an iron-red and gilt floral and foliate-scroll border, the rim with three floral sprays alternating with quatrefoil devices beneath a gilt scallop-and-dot band around the rim. CATALOGUE NOTE This teapot stand is from a service made for Ulrika Eleonora (1688-1741), the youngest daughter of King Charles XI of Sweden (1655-97) and Ulrika Eleonora of Denmark (1656-93), who in 1715 married Frederik (1676-1751), the son of Charles I, Landgrave of Hesse-Kassel and Princes Maria Amalia of Courland. During Ulrike Eleonora's rule as Queen Regnant following the death of her brother, Charles XII (1682-1718), Frederik served as her Prince Consort, but in 1720, she abdicated in his favor, and he succeeded her as Frederik I, King of Sweden, becoming Landgrave of Hesse-Kassel as well in 1730. A plate and tea canister from this service are illustrated by Wirgin, p. 153, nos. 161 and 163, respectively, along with a saucer and a teapot, nos. 160 and 162, from a very similar tea service made simultaneously for Frederik I, with his arms, rather than hers, in pretence on the Swedish Royal Arms.