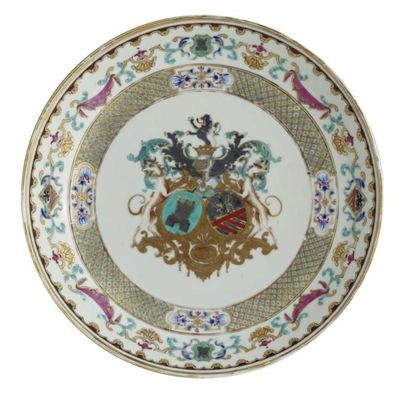 A CHINESE EXPORT ARMORIAL SAUCER DISH CIRCA 1736-40 the center painted in enamels, gold and oxidized silver with the arms of de la Bistrate of Anvers in Brabant, accollée with Proli of Anvers and Milan within a gilt trelliswork and turquoise floret border around the well, the rim with two cartouches and two diamonds depicting the individual arms interrupting an elaborate border of strapwork, foliate scrolls, shells and drapery swags beneath a brown and gold scroll and circlet band around the edge. The rim with a small hair crack An identical dish is illustrated by de Noordhout, p. 23 who on p. 22 comments that the service was made probably for Jean-Charles de la Bistrate (baptized in Anvers in 1715), seigneur de Loer and Neerwinde and chief almoner of Anvers who married on October 7, 1736 Anne-Martine Proli (b. 1711), also of Anvers. Her father Pierre Proli was one of the seven directors of the Compagnie d'Ostende, and after his death in 1733 many of his affairs were continued by his son, who may have been responsible for ordering this service for his sister and brother-in-law. The author also suggests a date of circa 1730 for the service; however, it is unlikely that it would date prior to the marital union of the two families whose arms are represented. A slightly smaller dish from this service is illustrated by Jörg 1989, p. 245, no. 96. A plate is illustrated by Howard and Ayers, Vol. II, p. 453, no. 459; and was in the collection of Mr. and Mrs. Rafi Y. Mottahedeh, sold in these rooms on October 19, 2000, lot 260. Other plates from the service are illustrated by Lunsingh Scheurleer, pl. 272; by Kroes, p. 15, pl. V; and by Howard 1974, p. 41 (center, left), along with an "incorrect" version (top, center) with the additional arms of Charles Boone, added by mistake, of which Krahl and Harrison-Hall, p. 289, no. 129 also illustrate an example. A further plate from this service was in the collection of Leo and Doris Hodroff, sold at Christie's in New York on January 23, 2008, lot 366.