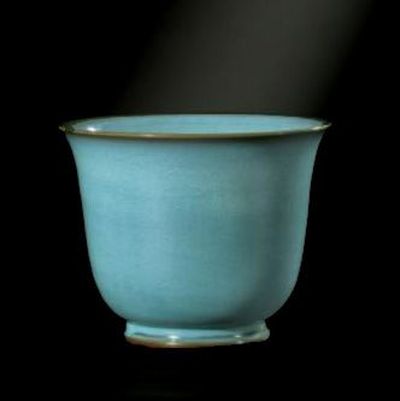 LOT 2508 A MAGNIFICENT AND EXTREMELY RARE 'JUN' BLUE-GLAZED IMPERIAL FLOWERPOT MING DYNASTY, EARLY 15TH CENTURY exceptionally well potted, the deep sides rising gently from a slightly splayed foot to an everted rim, superbly covered overall with a finely-flecked, lustrous pale sky-blue glaze, forming a milky ring with a pattern of 'worm-tracks' below the rim on both exterior and interior, the glaze draining to an even mushroom-brown band on the rim and around the foot, all fired to an outstanding glossy finish, the neatly finished footring unglazed revealing the buff body burnt orange, the base glazed olive-brown with shades of golden brown over five small pierced drainage holes and incised with the numeral er, two This flowerpot with its elegant form and superb sky-blue colouration belongs to a special group of 'Jun' flower vessels, which have distinctive, generally mould-made shapes and bear intensely coloured glazes. Being generally inscribed on the base with numerals from one (yi) to ten (shi), they are known as 'numbered Jun' wares. The precise dating of these 'Jun' flower vessels has long been debated. They have traditionally been attributed to the Northern Song dynasty, on account of a ceramic mould for coins inscribed with the Xuanhe reign name (AD 1119-25), which was reported to have been found at the kiln site at Yuxian, Henan province, together with fragments of 'numbered Jun' vessels. A later dating has, however, been proposed by some scholars, since such shapes are not otherwise known from the Northern Song period. Stylistically the various forms of 'numbered Jun' flower pots, jardinieres and vases seemed to fit in better with the repertoire of late Yuan or early Ming porcelains. In 2005, tests undertaken by the Shanghai Museum have suggested a Ming date, and more recently, the date of the coin mould itself has come under scrutiny and was basically discredited at a scholarly conference in Shenzhen. The Song date has therefore now been largely rejected in favour of a later attribution. Since a large body of 'numbered Jun' wares is remaining from the Chinese Imperial collection both in the National Palace Museum, Taipei, and the Palace Museum, Beijing, they would seem to represent imperial flower vessels, made for use at the Ming Imperial household. The rich glaze found on the present vessel is of a particularly outstanding quality that embodies the depth and opalescence associated with the best wares of this type. 'Jun' glaze is generally thick and opaque, of either light blue or purple colouration. The glaze usually runs thin at the rim and foot and tends to reveal a darker brownish colour that further heightens the resplendence of the blue glaze. It is rare to find flowerpots of this fluid bell-form, although a very similar piece, from the Avery Brundage Collection in the Asian Art Museum of San Francisco, is illustrated in Rene-Yvon Lefebvre d'Argence, Chinese Ceramics in the Avery Brundage Collection, Berkeley, 1967, pl. XXXVI A (black and white), and in He Li, Chinese Ceramics, New York, 1996, pl. 237 (colour) (fig. 1). The Avery Brundage 'Jun' flowerpot is also covered in a pale sky-blue glaze and is inscribed with the same numeral two (er), as the present piece, on its base. Another flowerpot of this form, size and milky blue glaze, also inscribed with the numeral two (er) on its base, was sold in our London rooms, 29th October 1925, lot 112. The significance of the numbers inscribed on the flowerpots is not yet fully understood, although it would have helped to match flower pots with suitable stands since the numbers coincide roughly with different sizes, 'one' being the largest and 'ten' the smallest version of a shape. For further information see George J. Lee, 'Numbered Chun Ware', Transactions of the Oriental Ceramic Society, vol. 21, London, 1945-46, p. 61, where five 'numbered Jun' vessels from the collection of Ernest B. and Helen Pratt Dane, probably the group of 'numbered Jun' wares outside China, and now in the Harvard University Art Museums, Cambridge, Mass., are recorded. Four further flower vessels are known of this elegant bell shape but all covered in a purple-splashed blue glaze; one in the Idemitsu Museum of Art, Tokyo, illustrated in Chinese Ceramics in the Idemitsu Collection, Tokyo, 1987, pl. 485 (fig.2), inscribed with the numeral four (si) and of slightly smaller dimentions; and three in the National Palace Museum, Taipei, published in A Panorama of Ceramics of the National Palace Museum: Chun Ware, Taipei, 1999, pl. 17 (fig.3), inscribed with the numeral one (yi), pl. 18, inscribed with the numeral eight (ba), and pl. 19, the smallest example in the group and inscribed with the numeral nine (jiu).