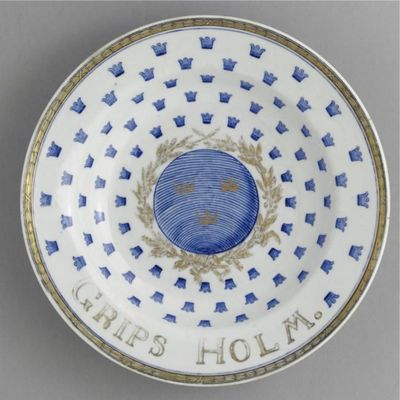 A CHINESE EXPORT ARMORIAL SOUP PLATE CIRCA 1775 painted in underglaze-blue and gold in the center with the arms of Sweden within a bowknotted laurel wreath amidst a ground patterned with coronets above the large gilt inscription GRIPS HOLM. on the husk-bordered rim. Small touched-up chips. CATALOGUE NOTE An oval platter from this service, which comprised both dinner and tea wares, is illustrated by Beurdeley, p. 197, cat. 203, who notes that it is from the service presented by the Directors of the Swedish East India Company to King Gustave III (1746-92) of Sweden in 1776, most pieces of which are still in the royal castle of Gripsholm on an island in Lake Mälav near Stockholm. The same platter is illustrated by Krahl and Harrison-Hall, p. 275, no. 122, who add on p. 274 that "the service was carried by the ship Terra Nova, which anchored in Gothenburg in 1776, [but it] is first mentioned in inventories of 1781, when it consisted of over 700 pieces, and is reported to have cost 600 taels." Fifteen pieces from this service are illustrated by Wirgin, p. 158, no. 167, who also illustrates on p. 159, no. 168, the extraordinary soup tureen, cover and stand displaying a combination of influences from silver and Meissen porcelain to contemporary Continental faïence.